I have found my new hot desk at the International Sonoran Desert Alliance offices in south-west Arizona.  This week I’ll be in residence here in Ajo (pronounced ‘Ah-ho’), the largest town to be found in the US half of the Sonoran desert. 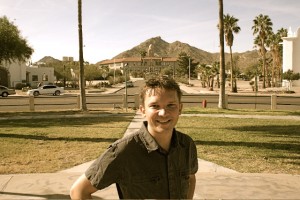 Ajo began life as a copper mining town in the late 1800s.  Over the years Native Americans, Spaniards and Americans have all extracted the town’s mineral wealth, but it wasn’t until 1911 that copper began being mined on an industrial scale.  In 1921, Phelps Dodge, the nation’s largest copper company, took over mining in Ajo and became the main employer of much of the town’s population.  The town boomed during this period, and Phelps poored money into the downtown infrastructure – cinemas, recreation halls, schools…

In the mid 1980s, with depressed copper prices, Phelps Dodge moved out of Ajo and the copper mines closed.  Without work, two-thirds of the town’s population moved away Ajo.  The railways closed, along with many of the town’s amenities – essentially, the heart was ripped out of the town.  From over 10,000, the population fell to under 4,000.

By the mid nineties, the town’s original secondary, middle, primary and elementary schools had closed.  Currently, only 46% of Ajo’s working-age population is in employment – and only half of those workers are in full-time employment. The International Sonoran Desert Alliance (ISDA) are tasked with turning around that decline… and they are using the arts and heritage as tools to accomplish their mission.

Recently, Tracy Taft and her team at ISDA bought up the Curley School – the beautiful old secondary school that sits in the heart of the old town.  Using affordable housing tax credits, heritage restoration funds and a $200,000 bank loan, they were able to turn the old classrooms into 20 workshops and residences for artists. The school corridors provide exhibition space, and a further 10 units were renovated in the former middle school in the square behind the Curley School.  Adverts were placed on websites across the US to encourage artists to relocate to these affordable apartments/studios.

Whilst in other towns (Tubac, Bisbee), this immigration of artists has happened organically over decades, ISDA are engaged in an experiment to see if such growth can be manufactured intentionally.  And it seems that it may work – in the Curley School’s first year of operation, 26 units have been filled – the majority by artists from other States.

However, the ambitions of ISDA don’t stop there.  They have also purchased the old primary school and turned it into a community arts space, where young people excluded from school can work towards an equivalent to a school leavers’ diploma, through a programme of arts and ICT studies.  Recently, they have been teaching the students how to create mosaics from waste tile fragments – the resulting colourful mosaics have been sold to local businesses as signage, bringing funds back into the programme and building confidence in the young artists.

ISDA propose to complete the school redevelopment by turning the town’s old elementary school into a retreat and conference space for international artists – bringing fresh perspectives and talents into the region and spreading the word about Ajo globally.

And that’s not all.  They are now turning their attention to the town’s main plaza.  Along with the schools, the plaza forms the heart of the old town.  Once a bustling and elegant centrepiece to the town, the square is now all-but deserted.  Nick Francis, who is now managing the plaza project, gave me a walking tour of the dozen or so units on either side of the plaza, which include two sizeable abandoned venues – a cinema and recreation hall.  ISDA sees the plaza as a more commercial opportunity, and Nick proposes to turn some of the units into affordable office space, prime location apartments, and retail/catering outlets.  By doing this, he hopes to be able to afford to save one of the performance spaces, and to fund back into ISDA’s community development work.

I have been saddened to see the number of communities in Arizona which have lost their downtown due to the establishment of out-of-town shopping malls.  In a few cases – as with Tucson – the depopulation of downtown has made rent in these areas affordable enough for artists to move in, bringing vibrancy back to the neighbourhoods.  In time, however, this vibrancy can then lead to the return of big business into downtown, pushing the prices back up and forcing artists out.

One artist explained this effect as follows: “They get pest control to chase the rats out of downtown to make it habitable for artists.  When the artists make the place vibrant, they get the developers to chase the artists out again.”

Nick suggests that the way to avoid this recurring pattern is to ensure that artists can take ownership of their premises – or, at least, that affordable rents are safeguarded over a sustained period.  This eems possible under the affordable housing tax credit system in the US.

Whilst their mines may have closed, their influence is still palpable in Ajo.  Old shift patterns worked at the mines still dictate the rhythm of the community.  Many miners would start early (5am), and shifts would end at 9pm.  To this day, if cultural events are programmed beyond 9pm, many audience members will walk out before the end.  Also, the mining company funded a lot of the entertainment in the town, and ISDA still find it hard to get audiences to part with money for events.

Recently, mining companies have started to reconsider the viability of the Ajo’s old mines.  However, a feasibility study that was planned this year has been shelved due to the global economic crisis.  It seems that Ajo cannot count on their old industry coming back to save the town.  Perhaps it will be the arts that play that important role.

Ajo is a a defining moment in its history.  Will decline continue, or will the efforts that are being made by the dynamic team at ISDA and others turn things around?  Having met the team here, I feel very optimistic and excited about the town’s future.

Again, I have been welcomed so generously in this community – last night, I was invited to dinner to meet the staff of ISDA.  Tomorrow I’ll be leading a marketing workshop for the artists of the Curley school, so I hope I can give something back.

In the meantime, this evening I took a drive up into Organ Pipe Cactus National Park to watch the sun set along a 20 mile loop road through the hills and canyons.  Glorious.