I woke early at 6am – which isn’t so bad considering that is 1pm British time. I think I may have beaten the jet lag by staying up late last night. 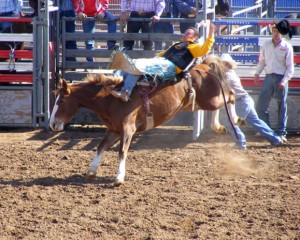 As a result, I left the motel by 8.30am and found the neighbouring barber show already open for business so I went to get a haircut. Odd to see a barbers open so early – especially on a Sunday. Phoenix doesn’t feel too much like a 24-hour city, but the hairdressers are obviously keen! After clippers, scissors and cut-throat razor, the barber produced a bizarre electronic massage machine and worked on my shoulders and neck – a somewhat unnerving experience that send my entire vision wonky for a while.

Freshly coiffured, I started to make my way on foot to the north west of downtown to catch the last day of this year’s Arizona State Fair (think of the Royal Highland Show or Great Yorkshire Show – only much, much bigger). At its heart, the annual fair has had agriculture at its core since its beginnings in 1884, but is now a sprawling mass of fairground rides, food and drink stalls, petting zoos, crafts outlets, and stages featuring music and dance.   Apparently, the fair draws over a million visitors, and features famous acts like Meat Loaf and Sheryl Crow on its main stage.

The whole thing is a sensory assault of sounds, colours and – in particular – smells. Every kind of meat seems to have been broiled, smoked and flame-grilled for the delictation of the crowds.

Not having seen a rodeo before, I headed straight to the grandstand to watch cowboys cue up to get thrown from their bucking broncos and then half trampled, all to the sound of cheering crowds. Nearby, another competition was being held for the cowgirls. This seemed to involve the participant plus horse hurtling down a track towards a lone goat, then dismounting the still-moving horse, straddling the goat and binding its hooves with twine. The same poor goat had its hooves bound and then untied about twenty times and looked seriously confused. 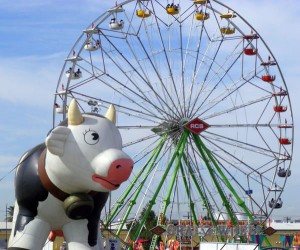 After spending a pleasant morning at the fair, including a hair-raising chairlift ride 30 metres off the ground, I walked the two miles back into downtown Phoenix. Not that Phoenix really has a downtown as such. In fact there’s no real discernable centre to be found, apart from some malls and Heritage Square (where I enjoyed a surprisingly good pint of Tetleys in a “British pub”, which boasted Andy Warhol-esque screen prints featuring the Queen and Benny Hill).

Nothing can prepare you for how few people actually take the choice to walk in the US. In nearly an hour, I passed two – maybe three – fellow pedestrians.

Later in the day, a waiter asked me what I thought the biggest difference between the UK and US was, and I told him “everyone drives everywhere here”. He agreed, saying that it was because everyone was in a hurry. I’m not sure if that’s true – the desert heat puts pay to that. However, because there’s so few people out walking, they tend to stand out as an oddity – and not to be trusted, perhaps. Such a shame when so many beautiful houses along the wide highways and palm-lined boulevards that I passed are surrounded by ugly metal gates and fencing. You can’t help thinking that people might not have to live under such tight security if only the sidewalks were full of more people walking from A to B.

I decided to spend the afternoon in a community that I could walk around in. Tempe is the main College area to the east of central Phoenix – an attractive community with plenty of cafes, restaurants and great second hand books stalls. I managed to find a beatiful old copy of Henry David Thoreau’s Walden – one of my favourite books. Now, there’s an American intellectual who talked the talk and walked the walk. Indeed, Thoreau wouldn’t be averse to pacing the sidewalks of modern America.

Anyway, it’s down to business tomorrow, with the first of many meetings with arts organisations here in the State capital. The American election is also only a day away – and more on that tomorrow.