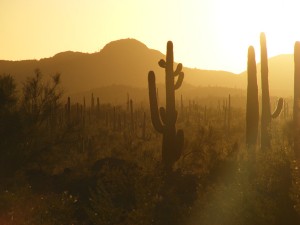 Wednesday morning was my big event – I had offered to lead a session on marketing and audience development for resident artists and community businesses here in the Ajo area.  Flyers had been sent out, notices posted and adverts placed, and we had a very respectable turnout of close to twenty people at the training.

I was concerned that the model for marketing planning the we’d developed back in Scotland might not be relevant here, but I think that most of the folk that showed up took something away from the three-hour session.

Most interesting were some of the issues raised by the group – issues such as the historic segregation of the town (Ajo was originally planned to have an Anglo, Spanish and Native American area).  On top of that, Ajo has distinct groups of long-term inhabitants, snowbirds (those who come down from the northern US and Canada during the winter months to escape the cold), and a more recent incoming population (mainly retirees).

One member of the group challenged the others to think about how the new artistic community in Ajo can work with the community to bring these groups closer together – rather than just  becoming another segregated community within the town.  It was reassuring to hear these sorts of debate going on, and shows that these issues are being seriously considered already.

Another of the artists asked me what I felt as an objective outsider about the developments in the town – could the arts be used to regenerate a community in a very deliberate way?  I have to admit that I gushed with enthusiasm somewhat.  However, I really do think that something very exciting is happening here.  The main challenge will be to keep the possible broadest community in Ajo on board and supportive with the new developments – and remember that Ajo is a community with no real historical tradition or reference points in the arts.

In truth, much of this job is being done already by the International Sonoran Desert Alliance’s community arts programme, and I rashly made a promise to the group to return to Ajo within the next ten years to find out what has been achieved.  How’s that for putting your money where your mouth is?  I’ve been asked to speak to the local newspaper here – the Copper News – to spread my enthusiastic message to the wider community.

Media coverage is so important in the States for any organisation.  When I was in Phoenix, Matt Lehram of Alliance for Audience told me that he presented three regular slots on public TV each week to promote the arts.  In fact, he asked if I woul go on air with him one time, but I declined politely!

After the marketing session, I did something that I’ve been looking forward to since I arrived in Arizona – I drove up to [wikipop]Kitt Peak National Observatory[/wikipop] to join a group taking part in their nightly star gazing programme. 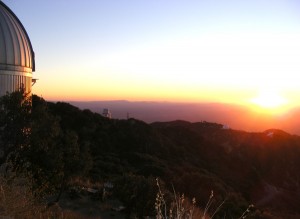 Kitt Peak is some 7,000 feet above sea level, and commands the most spectacular views across Arizona and into Mexico.  On a clear day, you can supposedly see up to 110 miles across the Sonoran desert.  Being in the middle of a desert, with little to no light polution from nearby towns, makes it the perfect place to observe the night skies.

At sunset, we were taken outside to watch the sun disappear over the horizon – watching out for the green flash, a subtle phenomenon that occurs as the energy of the sun’s rays dissipates through the atmosphere.

We then watches as bright objects began to appear in the sky – first Venus, then Jupiter.  We saw the International Space Station docked with space shuttle Endeavour orbit across the sky – plainly visible with the naked eye in these dark and clear conditions.

Retiring inside the Observatory museum, our guide – a highly knowledgable man named Roy – taught us how to read star charts, and soon we were back outside, identifying constellations with our binoculars.

Finally, we were all let loose on large-scale telescopes in one of the Observatory domes – viewing the distant galaxy Andromeda, and other phenomenon located at incomprehensible distances from our own small planet.  Many of the telescopes at Kitt Peak are owned by educational consortia – and it was impressive to find out that many of the spinning Observatory domes that evening were being controlled remotely over the Internet by students in Indiana, Boston and New Mexico.

The temperature up at Kitt Peak is some fifteen degrees lower than down on the desert plains, and it was something of a relief to get back down the mountain at the end of the evening.  I’m no longer accustomed to low temperatures after three weeks of daytime averages in the high 20 degrees celsius.  I will have to brace myself for a return to Scottish winter as I enter my final week here in Arizona.