Last night, I headed out to see the Arizona Theatre Company‘s latest production at the Temple of Music and Art theatre in downtown Tucson.  I’m hoping to meet the theatre company’s managing director, Kevin Moore, later in the month, so thought I better do my homework! 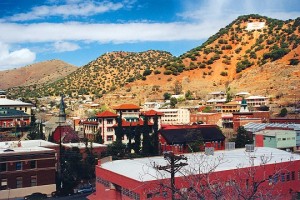 “The Lady with all the Answers” is a one-woman show based on the real life of American advice columnist, Ann Landers.  Landers was ahead of her time, responding open-mindedly to her reader’s letters on subjects including homosexuality, unwanted pregnancy, marriage, and the proper way to hang a toilet roll.  At the height of her fame, her advice column was syndicated through the media to a readership of 60 million people.

The play is set during one evening in 1975, and concerns the most difficult column that Landers ever wrote – the confession to her readers that her supposedly blissful marriage of some 37 years had ended in divorce.

Actress Nancy Dussault is superb, addressing the audience directly with a wit and frankness – a combination that made Landers such a successful confidant for her readers.

The 650-seat Temple of Music and Art theatre was built in 1927, and renovated in 1990.  Despite a modern feel, the theatre itself is designed in a Spanish colonial revival-style, with elegant courtyard at its entrance.  It is a wonderful place to spend an evening.

Last night was also saw the annual Tucson Firefighter’s Chili Cook-Off, and I celebrated the occasion in a spacious local Mexican restaurant, complete with mariachi band.  The perfect end to the day.

In the morning, I woke to find that my motel’s forecourt had been transformed into an art exhibit.  A six foot tall television had been fashioned out of plywood and plastic, and dozens of swings hung throughout the site – an installation that will form part of this weekend’s Tucson open studio tours.

Unfortunately, I needed to move on this morning, and I was up early to drive 80 miles southeast to Bisbee.  The town was founded as a copper, gold, and silver mining town in 1880.  Since the 1950s, however, mining has been in decline.  The subsequent crash in housing prices, coupled with an attractive climate and picturesque scenery, led to Bisbee’s rebirth as an artists’ colony.

Today, the original city of Bisbee is known as “Old Bisbee,” and is home to a thriving downtown cultural scene.  It is not dissimilar to Tobermory on the Isle of Mull, but set up in the desert hills – a lazy, sunburnt town brimming with colourful crafts and bric-a-brac shops.

I arrived in Bisbee during a Harley-Davidson convention, with the roar of motorbikes throughout the town, and what looked like the line-up of ZZ Top standing on each corner.

After a tour of galleries and crafts outlets, I took the opportunity to visit the local hat shop – Optimo – hoping to purchase something to protect my face and neck from the fierce afternoon sun.  The proprietor measured my head with a crazy metal contraption that looked like a cross between a top hat and the metal mechanics of a typewriter.  I’ve never suited hats, and it turns out that this is because I have a freakish head shape (the proprietor used the word ‘uncommon’ rather than ‘freakish’) – more elongated than most, with the crown set off to the left.  Somewhat crestfallen, I left the shop empty handed.

Tomorrow, I move on into the desert for a few days’ retreat, and a chance to catch up on report writing after a busy first week.  I am visiting a yoga and meditation centre close to Fort Bowie (pronounced ‘Boo-wie’).  Whether I will have Internet access there is anyone’s guess – if not, then it may be a few days before my next blog entry.