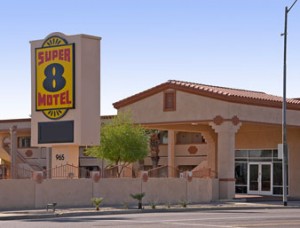 Super 8 Motel - my home from home in Phoenix

This morning, I had a fascinating meeting with Matt Lehrman.  Matt is Executive Director of Alliance for Audience, an agency helping the Greater Phoenix region’s arts and cultural community to raise their visiblity and engage new audiences.

A focus of Alliance for Audience‘s work is the web portal Show Up (www.showup.com) – a site that I have long admired, and a potential model for developing the website of HI-Arts, the organisation for which I work.

Matt used to work in arts marketing at an arts venue, where he and his colleagues would regularly complain about the lack of any central agency to coordinate the promotion of the region’s arts.  He told me that his mid-life crisis in 2003 was when he decided to establish the agency to do that job (most folks decide to buy a sports car or take up motorcycling).

Alliance for Audience now has five members of staff, 160 member arts organisations around Phoenix, and also runs a discount ticket portal (www.showuptickets.com), and an online ticketing service for venues and promoters.

What struck me most were the similarities to the work we have been doing at HI-Arts for the past four years – both with the development of our website and the creation of thebooth ticketing service for cultural organisations in Highlands and Islands.  Our experiences, challenges and ambitions in joining up marketing and new technologies were uncannily similar.

Where there were differences, these were down to the different economic realities faced by our two organisations.  Regardless of the arguments for or against public funding for the arts, whether an arts organisation is reliant on the public purse or engagement with business changes its culture and opportunities.

In the UK, the culture (for better or worse) is towards reliance on revenue funding from the public sector.  In Arizona, Matt tells me that public funding for the arts is just not available, which forces cultural organisations to be highly entrepreneurial and business-minded in pursuing their missions.  Whilst trusts and foundations regularly fund into major capital developments, organisations need to adopt business models that will underwrite ongoing costs.  This has lead Alliance for Audience to subcontract services in order to keep the organisation administratively light, to monetize any value to be found in the Show Up service, and to forge partnerships with all sorts of businesses to reach the marketplace.

The down side of such focus on courting business partnership and sponsorship is giving up some control over one’s cultural product.  However, on the positive side, it forces arts organisations to be much better at facing the marketplace and focusing on the needs of audiences.  Tomorrow, I meet Arts and Business Phoenix – the American cousin of our own Arts and Business in Scotland – which seeks to help develop relationships between cultural and commercial organisations.

Tomorrow we will also see the election of the 44th President of the United States of America, and I have been invited to an Election Party here in Phoenix tomorrow night.

Watching the final days of campaigning on television, the rhetoric at Republican rallies seems to have grown much more angry.  The campaign seems to have remained remarkably civilised up to now, but there has been a real introduction of scaremongering adverts and negative campaigning now.  By comparison, Obama tries to contain any anger crowds might feel towards their Republican rivals at rallies, telling any crowds jeering McCain, “You don’t need to boo, you just need to vote.”

America has just heard the news that Barack Obama’s grandmother passed away last night.  I recently read Obama’s impressive book The Audacity of Hope, where he describes his grandmother’s significant influence on his life.  How sad that she won’t see whether the boy she raised becomes president.

Whilst McCain is Governor here in Arizona, and at the time of writing is starting his final rally in the State, you can probably guess who I’ll be shouting for tomorrow night.