HI-Arts , the organisation I work with, has jokingly been referred to as “Hotel California” due to the length of time staff members tend to stay with the organisation.  It must be doing something right.  So it’s appropriate that I should end my sabbatical at a hotel in California.

San Diego is situated on the Pacific coast close to the Mexican border – about two hours south of Los Angeles.  I arrived in the city during a three-day walk against breast cancer.  It was quite a carnival atmosphere, with tens of thousands of women clad in pink hiking down the sidewalks of Ocean Beach.

Not having planned to visit San Diego, I spent the best part of two hours driving around looking for a good place to stay for a few days.  I ended up on Mission Boulevard, a leafy suburb to the north west of the city overlooking sandy west coast beaches. 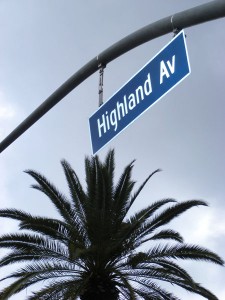 After looking at several hotels, I walked into the lobby of a particularly luxurious looking residence called the Pacific Terrace – not expecting to be able to afford to stay there.  Sure enough, they told me that room prices started from $350.  However, they must have noticed my visible shock at the price because they quickly dropped it to $100, and we had a deal.

San Diego is a truly laid back place – although people don’t walk here so much as jog, surf, skateboard or rollerblade.  The neighborhood where I stayed is well-served for shops (so long as your needs are limited to surfing gear and beach wear).  I spent the days in San Diego pacing around some of the more beautiful districts in the city – Little Italy, the Gaslamp Quarter and Ocean Beach – and the evenings working in my spacious hotel room.

I also managed a quick swim in the Pacific.  The sea is quite shallow for a long way out from the beach – only about three feet deep.  However, every so often, a large wave – often up to seven feet in height – can break and take you by suprise.  You can see why it is so popular with surfers.  I spent a happy hour trying to vault breakers as they rolled in, until the incoming tide claimed my towel, sandals and t-shirt that I had left on the beach, and I had to squelch my way back to the hotel.

For me, San Diego would be the perfect city if it wasn’t for three things:
1) the ugly old highway flyovers that dissect many of the more beautiful parts of the city;
2) the fact that they decided to build an International airport in the heart of the downtown area;
3) the high levels of homelessness in the city

The number of homeless people in San Diego stunned me.  All ages and backgrounds of people seem to be represented in the city’s vagrant population.  Many look just like you or me, wandering round reading newspapers and drinking from a Starbucks cup.  It’s only when you spot that they are pushing around all their worldy possessions in a shopping trolley that you realise their plight.  I spotted scores of homeless people in one afternoon in just one small part of the city.  It’s hard to believe that a city where the business seems to be thriving (especially for shopping trolley manufacturers) that more hasn’t been done to alleviate this problem.

Thursday was Thanksgiving, and everything closes down here for the holidays.  I needed to start to make my way back to Phoenix (about an eight hour drive) for my weekend flight back to the UK.  I decided to break the journey in Los Angeles on the way back, staying in a cheap hotel at the junction of Hollywood Boulevard and Highland Avenue, appropriately enough.

I was disappointed with Hollywood – the movies certainly don’t prepare you for the let down of the place itself, with its hundreds of cheap souvenir stores.  Sunset Boulevard was a particular disappointment.  It was a particularly grey day in Los Angeles, and the HOLLYWOOD sign on the hill was hardly visible – I actually saw rain for the first time since I arrived in Arizona four weeks ago.

Still, I had some fun wandering down the Walk of Fame, looking for the more incongruous names gracing the sidewalk stars – Kenny Loggins, Barry Manilow, Julio Iglesias…  Even the bays in the underground parking lot of my hotel were names after movie stars.  I parked in the Kevin Spacey bay, suprised that they hadn’t removed his name when he moved to the Old Vic in London.

Last night, I finally returned to where it all started – the Super 8 Motel in Phoenix – for my last night in the US.  I managed to get last minute tickets to a basketball game at the US Airways Center, and spent the evening watching the Phoenix Suns being thoroughly outclassed and outplayed by the Miami Heat.  The Suns are now the team of one of the more well-known names in basketball – Shaquille O’Neal (Shaq).  However, at 36, he doesn’t seem to get to the basket so much nowadays (the Suns supported next to me told me that gravity had finally got the better of him).

Since my father took me to a basketball game during a holiday to North Carolina in 1992, I have loved the US approach to spectator sports.  The Suns game was a great spectacle from start to finish, with music, lights, dancing, quiz breaks, miniature flying Zeppelins, etc.  I love the way they play “goody music” and “baddy music” depending on which team have the ball – something that would brighten up UK sports events no end, I feel.  It’s wonderful that the whole family attends games in the US – not like back home where football crowds consist mainly of men trying to get out of going shopping.

So my sabbatical is drawing to an end.  It has been such a privilege to be able to come to Arizona to work and learn.  When I completed university, I was fortunate enough to spend some months living and working in Toronto, and it made me realise the fundamental difference between visiting a place as a tourist and actually embedding oneself in the day-to-day life of a different community.  It’s such a great opportunity and an enlightening experience.

The people that I have met during my sabbatical have been, without exception, gracious and so generous with their time and knowledge.  Arizona is a truly wonderful State.  I could have stayed here for another month and still not seen all that I’d hoped to.  Most disappointingly, I never got to the Grand Canyon… although I did see it in 3D at the IMAX cinema.

Four weeks, 2500 miles and a new president later, what have I learned?  Well, the arts organisations here obviously work in a very different economic context.  They are inevitably much more focussed on securing income from private and commercial sources, and this can be both a positive and a negative.  On the positive side, it can make arts organisations and artists more focused on their marketplace and audience.  Also, spreading their income across a range of sources (ticket sales, donations, memberships, advertising space) makes arts organisations here less susceptible to loss of any one major funding source.  The loss of a major public sector funder in the UK can mean the death of an organisation.  The sector here also seems very successful at quietly securing funding for the arts from a variety of non-arts sources – affordable housing, health care, community development, etc.

On the other hand, reliance on private and commercial funding can lead to patchy provision – especially in rural areas that just don’t have the size of businesses or communities to support arts provision .  In particular, performing arts touring is particularly noticeable by its absence here in rural communities, and visual artists often need to come together to form communities of a critical mass in order to survive and thrive.

Arts organisations in Arizona seem less precious about doing everything themselves, and will farm services out to the commercial sector where market forces will allow.  This can mean some loss of control of the artistic product, but has benefits in terms of broadening audiences and engagement with the arts.

However, networking does seem to be a problem here, and I was surprised at the number of arts managers who knew little about what other arts initiatives were going on in their own state.  Without the connections and overview that an agency like HI-Arts can provide, best practice can be hidden from the sector.  Indeed, after four weeks, I feel as though I have more of an overview of the arts sector in Arizona than many in the industry here.

As I say goodbye to Arizona, I’m hugely thankful to HI-Arts and the Scottish Arts Council for helping to make this sabbatical trip possible.  They should be encouraged to know that some of the organisations that I visited now intend to put similar policies in place to allow their staff to take sabbaticals.  What’s more, a number are considering coming to Scotland to do their own research.