The city of [wikipop search=”Yuma, Arizona”]Yuma[/wikipop] is a similar size to Inverness in the Highlands, and I came here to visit the Yuma Art Center. 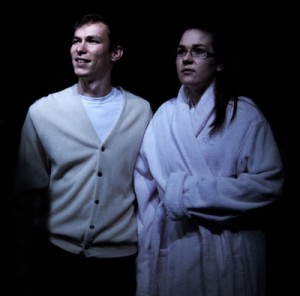 Yuma seems to have a robust economy – like Inverness, it is the largest settlement in a predominantly rural region, and provides services for many smaller communities.  It is well connected on the Arizona/California state line, with Interstate 8 and a major railroad route running through the city.  As a result, Yuma is growing fast.

Unlike many arts organisations in the state, Yuma Art Center is funded predominantly from public sources.  In a very deliberate attempt by Yuma City Council to revitalise the downtown area, funding was made available for both the capital development and revenue costs of the centre.

Rex Ijams is the centre’s Arts and Culture Program Manager, and he kindly showed me around the centre buildings.  The newer building includes modern and spacious gallery, workshop and administrative office space, built in 2002.  This is attached to the town’s historic Yuma Theatre – a 650 capacity venue with a track record for performing arts and cinema.  Built in 1912, the theatre has had a chequered history – it has burned down twice (what’s that Oscar Wilde quote about once being misfortune, twice looking like carelessness?).

The arts centre is fostering strong links to the community through an intensive and high-profile education program – giving over large and prominent gallery space to displays of work by local school pupils who have regular art classes within the centre.  The centre is also working to develop public arts projects on Yuma’s Main Street.

It’s interesting to see that programming of both the centre’s main gallery and retail space is outsourced to local arts group, Yuma Fine Arts.  Whilst I’ve been in Arizona, I have been struck by the preparedness of arts organisations here to outsource, franchise or delegate services and roles.  Back home, many arts organisations try to do everything themselves – taking on catering and retailing operations on top of marketing, ticketing, programming, front of house, etc.

I often hear it said that small, under-resourced arts teams cannot afford to outsource work, or cannot afford to franchise potentially prosperous income streams to third-parties.  However, neither can small teams expect to have the time, energy or skills to take on such a diverse range of tasks in-house.  Indeed, such multi-tasking can seriously limit an arts organisation’s ability to make significant developments in any one area.

Perhaps US organisations are more realistic in this respect.  For instance, whilst the arts centre in Yuma doesn’t have the income of a retail outlet, it also does not have the significant expense or distraction of staffing, stocking and developing a retail outlet (which often involve many unrecorded costs which can wipe out any on-paper profits from such an outlet).

On the other hand, outsourcing doesn’t always work out the way one would hope.  For instance, I recently attempted to book tickets to a basketball game that is taking place on the last night of my sabbatical in Arizona.  Like many large-scale theatres, most of America’s professional sports teams outsource all their ticketing operation to Ticketmaster.  First, I tried booking tickets to the game online using the Ticketmaster website.  Despite being disgusted with the processing fee of nearly $10 that the site was going to charge me for a single ticket, I got as far as the checkout screen.  However, I couldn’t get any further because I didn’t have a US billing address.  I then tried the Ticketmaster phone booking line, which turned out to be one of those voice automated services.  After the computer at the other end of the phone repeatedly failed to recognise what I was trying to say to it, it decided to pass me on to a human operator, who subsequently put me on hold for five minutes.  I hung up, and despaired that so many cultural organisations are choosing to place such poor customer service between them and their customers – and this in the home of great customer care!  But enough of my rant…

Yuma Art Center works closely with the local visitor bureau, heritage organisations, festivals, cultural councils and the Yuma Chamber of Commerce, and the centre is certainly having an impact on the downtown area.  A number of new shops and cafés have appeared over the last few years.  Even a new multiplex cinema has also opened at the other end of the street, purchased by the Native Indian community using profits made from their desert casino operations.

Yuma is home to an impressive array of arts groups, including two semi-professional ballet companies, two visual arts groups and a community theatre company.  In fact, my other reason for visiting Yuma is to see local Yuma Community Theater perform a stage adaptation of Frank Capra’s classic [wikipop]It’s a Wonderful Life[/wikipop] at the Yuma Historical Theatre.

My oldest and dearest friend, Miles, first introduced me to It’s a Wonderful Life one Christmas during our early teens, and I fell in love with it immediately.  Indeed, I remember running through the streets of our home town in Yorkshire yelling “Merry Christmas, Bedford Falls!” at everyone.  It’s been a staple of my Christmases ever since, so what better than to see a drama about small-town America performed by a small-town American theatre company on a small-town American Main Street in the run up to Christmas?  (By the way, it’s a very strange experience to be here in 30 degree heat with Christmas wreaths and tinsel hanging against a backdrop that looks like something out of a Roadrunner and Wile E. Coyote cartoon.)

As for the show – sure, it was an amateur company, and the staging and acting were patchy at times.  However, professionally-trained actor Larry Stone did a fine job in the lead role of the put-upon George Bailey – and carried off a remarkable impersonation of James Stewart into the bargain.  I left the theatre with the usual tear in the eye and lump in the throat that I inevitably get during my annual viewing of It’s a Wonderful Life.

The following morning I woke up in my hotel and planned my next move.  During my time in Arizona, a range of exotic yet familiar names have been calling to me from roadsigns – Los Angeles, Grand Canyon, Santa Fe, Albuquerque…

As I left my hotel, I spied a sign to San Diego, and thought “Why not?”, and headed towards the west coast on the Interstate 8.  After all, I’ve never been to California, and after three weeks of meetings and travel, I need to hole up somewhere for a few days and start to write up some notes.  Plus, I’m supposed to be laying the groundwork for a major redesign of the HI-Arts website whilst I’m here, and haven’t had a chance to start thinking about that at all yet.