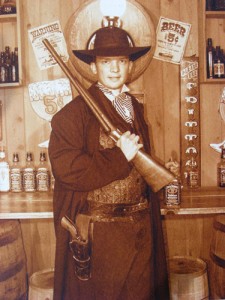 That “just stepped out of a saloon” look

On Sunday, I headed to Tombstone – the self-styled “Town too Tough to Die” and location of the infamous gunfight at the OK Corral, where Wyatt Earp, Doc Holliday, and Virgil and Morgan Earp fought the notorious Clantons and McLaurys on 26 October 1881.

The gunfight has come to symbolise the struggle between law-and-order and open banditry in frontier towns of the Old West.  In fact, a recreation of the gunfight is staged on main street every day at 2pm.

The town of Tombstone is now something of a tourist trap, designed to empty the pockets of unsuspecting visitors – like a miniature Blackpool set on the dusty, windswept set of a western film.  Behind the Old West facades of saloons and gun shops lie souvenir shops and a range of tiny, and somewhat shabby, museums.

I couldn’t resist visiting “Ye Olde West Photo Shoppe” and parting with $40 for a couple of shots of myself in full Wyatt Earp costume.

No day out in Tombstone is complete without a visit to Boothill graveyard – a makeshift cemetry on the outskirts of town with many fabulous and ungrammatical musings painted onto the white headstones:

Soon after, I was on the road again – this time heading into the hills for Diamond Mountain University retreat centre, set in the high desert ten miles from the nearest village of Bowie.

The retreat centre is set nearby Fort Bowie National Historic Site, which was established in 1972 to commemorate the bitter conflict between the Chiricahua Apaches and the United States military.  Another interesting fact – Bowie is also the home of the character John J Rambo, played in the movies by Sylvester Stallone.

The University preserves and teaches a range of ancient disciplines – including  yoga, meditation, Tibetan medicine, Thangka painting and sand mandala creation.  The centre, only recently established, is reminiscent of what the Findhorn community might have looked like in the early days.  There are a number of adobe buildings in which communal teachings are held, but the majority of the students are housed in yurts and camping grounds.

On arrival, I rashly agreed to prepare refreshments for the students that had been involved in a yogic teaching all day.  I had anticipated making a dozen or so cups of tea.  Little did I know that there were 150 students in class, and I spent the rest of the evening running around boiling up huge vats of water.  I have a reputation for making the worst cup of tea, so I do hope the results weren’t too disappointing for the tired group.

Far from being a restful retreat, the last couple of days here have been an intense experience.  The days start with early yoga at sunrise, followed by an hour and a half of meditation (made all the more challenging by the number of flies that constantly land on you up here).  Then there are two hours of Hap Ki Do, a powerful Korean martial art taught by Master David Herbert from New York – I’ll be sore tomorrow!

And that’s just the morning…  In the afternoon, I’ve been learning Tibetan debating.  You may have seen Tibetan monks debating – they square off against each other and use a lot of shouting and clapping to try and put each other off.  The idea is for the student to become so good at the art of debating that their opponent cannot throw them with their theatrics.  It’s sometimes compared to old western gun slinging!

Finally, in the evening, Chinese master, Mr Chen Chao, is offering teachings on the Tao Te Ching – the main text of Taoism.

I’m pleased to say that everyone is now winding by watching a film – appropriately enough, it’s Kung Fu Panda!

I have been staying in my tent in the desert campsite here, and have come across an array of wildlife already -rabbits, skunks and, somewhat more exotically, hyenas.  Fortunately, all of them seem to have been more scared of me that I have been of them, and it’s fine by me that we stay out of each other’s way!

The temparatures here in the high desert drop dramatically at night, and can often reach freezing.  I’ll be wearing an extra couple of sweaters when I retire to my tent tonight.