On Thursday morning, I was up early for a 200 mile round trip to the town of Sells to visit the new Tohono O’odham Native Cultural Center and Museum.  This might seem a long way, but the roads here make life easier – the only trick is to stay awake on those long, straight desert roads in a car with automatical gears. 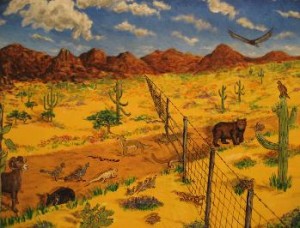 “People Can Make Fences” by Legarto

28,000 Tohono O’odham Native Americans live in communities spread out across the Sonoran desert in southern Arizona and northern Mexico.  The establishment of the cultural centre with its museum, archive, conference centre, artists’ studios and genealogy research research facilities is the fulfilment of a fifty-year-old dream for the Nation.  Indeed, the Nation’s first council wrote of the pressing need for such a focal point for the community and its cultural heritage back in the 1950s.

The centre is comprised of a number of spacious, modern buildings, set out in the desert on the outskirts of the town, close to one of the Nation’s most sacred mountains.

I met with Allison Francisco, the centre’s young Artistic Services Manage, who gave me a tour of he building and provided a thoughtful and eloquent insight into the importance of the centre to the community.

A member of the Tohono O’odham Nation and an artist herself, Allison explained that the opportunity that the centre and similar forward-looking initiatives offer the Nation is helping to keep younger people in the community within their native lands.  Allison confesses that if it hadn’t been for the post at the centre, she would have had to relocate outside of the reservation in order to achieve her full potential.

On the other hand, she remains rooted in, and committed to, her community and stresses the importance of showcasing the lives, achievements and values of those that have gone before for the new generation – a generation ever more exposed to the often negative influences of youth culture from the wider US.

There is an inevitable friction between traditional values and new opportunities here, but the centre is not adverse to exploring creative self-expression in their contemporary gallery space.  Allison’s ambition is for traditional culture and contemporary art “to dance with each other” at the centre.  Indeed, whilst I was there, artists working with the University of Arizona were assembling a sand sculpture in the museum grounds as part of a forthcoming symposium entitled “The Desert in between us”.

The museum exhibitis include displays on land, leadership, food (diabetes has been a growing challenge for the Nation, and the centre plays an educational role here) and language.  The O’odham Ni’oki language has seven dialects, but the primary language of the Nation is now English.  Many natives feel that if their language is lost, that will signal the end of the native culture.  That is, they believe that the stories and lessons of their Nation can only be expressed in their native tongue.  Crowbarring these stories into English words can only destroy the nuances and resonance that these tales have for the Tohono O’odham.

I left the centre saddened by the prospect of such a loss, but encouraged by the work of the centre to preserveand advance the culture of the Nation. 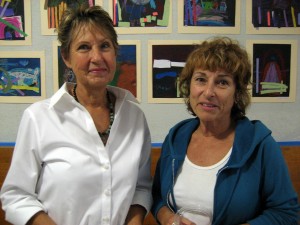 Back in Ajo, I paid a visit to the Curley School and artist/sculptor Mari Kaestle.   Originally from New York, I found Mari to have an incisive take on the artistic community developing here and its relation to the town as a whole.

Mari started her career as a puppet designer, working for a time in the late 1970’s and early 80’s with Jim Henson’s team at The Muppet Show.  I’m told that she worked on designs for the Miss Piggy puppet amongst others.  I don’t know about you, but I find that amazing – I guess I’m of that age where The Muppet Show was an integral part of Saturdays during my formative years, and I had to restrain myself from just speaking about muppets with Mari.

Nowadays, Mari makes the most beautiful contemporary doll sculptures .  She has plans for an installation based on the song “Send in the Clowns” written by Stephen Sondheim and performed by Judy Collins, which I hope with thrill and delight the community here in Ajo, and provide a stepping stone to exhibitions in more major galleries.

In the evening, Nick Francis of ISDA showed me some alternative local culture at Pugsey’s Bar – a great local haunt with, as the name suggests, pug dog in residence.  Nick and I spent a happy hour or two indulging our shared interest in US politics.  President elect Obama has a strong grounding in community development and, being a community planner himself, Nick has followed the recent election with some interest, to put in mildly.

I am thoroughly grateful to Tracy Taft at ISDA, who has organised my stay and provided me with so many introductions to the artistic community here.  Tracy invited me for a farewell dinner with some of the ISDA team and photographic artist, Jewel Clearwater.  Jewel has a remarkable and recently-discovered talent for portrait photography – she consistently manages to catch something  of the spirit of her subjects.

As I was leaving Ajo the next morning, Jewel caught me in the town plaza and launched into an impromptu photoshoot with me as her subject.  I look forward to seeing the results.  She also gave me a gift from another artists who had attended my training session the other day – a thirty year old bottle of Highland Park whisky.  I have been humbled by the generosity I have witnessed throughout my time here and, after spending a busy but magnificent week in Ajo, I was sad as I drove west towards my next stop, Yuma – the westernmost town in Arizona.