It has been a long and historic day. 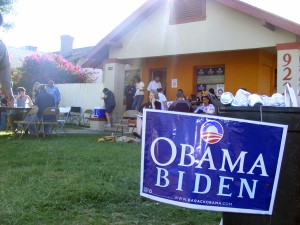 It started at 9am with a meeting at the Arts and Business Council of Greater Phoenix – an agency charged with helping cultural organisations to forge mutually beneficial partnerships with the commercial sector, and an American cousin to Arts & Business Scotland.

Debbie Paine and her small team manage to run an impressive range of services, training business leaders to mentor and sit on the boards of cultural sector non-profit organisations.  They also play an extremely important role in a State where the arts are so reliant on support from the commercial sector.  The names of a number of businesses – such as American Express and Wells Fargo – seem to come up time and again as major supporters of the arts infrastructure here.

On my return to downtown Phoenix, I took some time between meetings to wander round Heritage Square – a striking remnant of Phoenix’s Victorian past.  The Rosson House is the cornerstone of a city block dating from the late 1800s.  Museums, shops and restaurants now inhabit the block, which encompasses the only remaining group of residential structures from the original town of Phoenix.

I took a leisurely look around the Arizona Science Center, and managed to catch a fantastic film at the IMAX cinema, Grand Canyon Adventure 3D – an artistically-realised documentary with an environmental message.

The use of new 3D technology was thrilling – one moment suspending the viewer over the Canyon itself, the next plunging into the white water rapids.  Add to this a shimmering and expansive score by the Dave Matthews Band, and voiceover by Robert Redford, this has to be one of my most magical cinema experiences.

In the afternoon, I met with Robert Booker and his colleagues at the Arizona Commission on the Arts.  Robert is a highly knowledgable and articulate arts professional, with distinguished goatee beard – not unlike another similarly-named executive director I know!

I have been extremely impressed by how all of the people I have met with to date have been so very gracious and generous with their time – and Robert and his team gave me some fascinating insights. 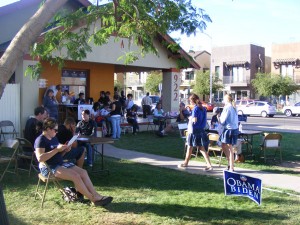 After the meeting, around 3pm, I wandered down to the Phoenix headquarters of the Barack Obama presidential campaign – essentially, an old house in the middle of the bohemian arts quarter of the city on East Roosevelt Street.  There was a general bustle and air of excitement, with campaign volunteers making final phone calls, well-wishers spilling out onto the streets, and stalls outside selling t-shirts with the slogan “END OF AN ERROR – 11.4.08”.  A great atmosphere, and I spent a pleasant hour speaking with folks there.

This evening, I had the immense privelege of being invited to the Scottsdale home of Matt Lehrman, Executive Director of Alliance for Audience, where his friends and neighbours had gathered to watch the drama of the election unfold on CNN.

The taxi journey to Scottsdale was slow – State Freeway 51 had been closed by police (apparently to allow Sarah Palin’s cavalcade to travel to a final rally with Senator McCain in Phoenix later in the evening).

Matt and his family were the perfect hosts – plying me with wonderful chili, a strange but enjoyable jello/rum concoction, and a chocolate cake with icing that proclaimed “Good Riddance to George”.  We played a game to see who could guess which candidate would capture each of the swing States.

But soon in the evening – sooner than I’d anticipated – the results were in.  I’m sure they will be celebrating late into the night at that old house on Roosevelt.  As for me, I’m still on British time.  It feels late, I have to move on to Tucson tomorrow – and it’s been a long and historic day.