I moved on from my retreat at Diamond Mountain in the middle of the week – brain and body sore from a strict regime of aikido, debate class and sleeping outdoors. 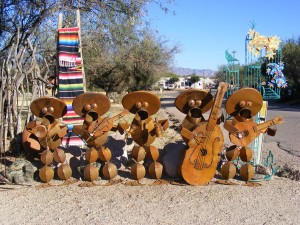 Traveling south from the cooler air of the high desert towards the Mexican border, I’ve noticed the air getting warmer, a growing number of Mexican voices on the radio, and an overwhelming presence of border patrol vehicles.  On some of the minor desert roads in the far south, border patrol cars actually outnumber other travel, such is the challenge of illegal immigration here.

I’ve been driving through Arizona’s wine country.  It is much hotter here, but the land is more fertile, and this area is renowned for its vineyards and wineries, as much as for its ranching history.  I visited the communities of Sonoita and Patagonia – both pretty villages with a number of craft shops and community arts organisations – before reaching the less pretty town of Nogales, which straddles the Mexican border.

However, my destination down here is the town of Tubac – “where art and history meet”, according to the sign.  I’m staying in the Tubac Country Inn, the most luxurious accommodation of my trip so far – which is just as well as this is the first bed I’ve slept in for days.

Tubac was founded in 1752 as the first Spanish colonial garrison in what is now Arizona, although things started way before that (it’s believed that the Tubac area has been inhabited over 11,000 years). However, Tubac didn’t really come into its own until the twentieth century, when artists started to flock to the town from across the US, inspired by the incredible light that falls on the landscape of southern Arizona.

In 1948, noted painter Dale Nichols moved to the town from Nebraska and set up an arts school in five adobe buildings.  Whilst the school closed within a year (apparently the local ranchers and folks from Tucson hadn’t been so serious about pursuing an education in the arts after all), by the end of the 1940s a small artists’ colony had been established.

The town now has a population of around 1,000, and its commercial centre consists of around 90 outlets of which 80 are galleries, craft shops and artists’ studios.  I’ve never seen such a concentration of arts facilities in one place.  It’s as if Maslow’s hierarchy of needs had been turned upside down.  Everywhere you look there’s another small but perfectly formed creative hub – Galleria Tubac, Clay Hands Studios, Creative Coyote, Sunrise Jewellers, Designs in Copper, Tubac Art Exchange, Karin Newby Sculpture Gardens, to name but a few.

Many of the outlets have yards brimming with pottery and metalwork – much of which is left out at night when the shop is closed.  Some shops even have notices directing out-of-hours customers to post payment through the letterbox and help themselves.  It’s just that sort of community, I guess!

Right at the heart of all this is the Tubac Center of the Arts, a combined visual and performing arts venue and the only not-for-profit organisation in town.  I met with their busy, small team yesterday.  Like many non-profit cultural organisations in the US, they received less than 10% of their income from public subsidy, and rely heavily on donations and earned income to programme their gallery and performing arts series.

Last night, I attended one of their events, entitled “Tubac Swings” (before you ask, it was an evening of jazz music of the Benny Goodman and Count Basie school – our esteemed Arts Journal Editor would approve!).  The band leader was Frank Guldseth – his biog notes that he is recently retired from the CIA and, sure enough, he led the 16-piece band with a precision and attention to detail you’d expect from a former Central Intelligence Agency man.

Today, I have spent an enjoyable day pottering around the galleries in town, chatting with gallery owners and artists.  There are interesting parallels between the landscapes of Arizona and the Highlands and Islands – the mountain formations of the two regions can be strikingly similar… just substitute the desert between for lochs.  Indeed, the best of the contemporary landscape artists’ work here has a resonance with the the work of Scottish artists such as James Hawkins or Wendy Sutherland.  It would be fascinating the organise an exchange of work, but it is difficult to find agencies here that would facilitate such a thing.  I’m increasingly struck by how lucky we are in Scotland to have a funding infrastructure that supports the export of work and talent.

During my wanderings, I had a particularly interesting conversation with Gerald Dawavendewa, owner of Tohono Village Enterprise – a gallery and gift shop dedicated to the promotion of work by the local native Tohono O’odham community.  The quality of craftmanship of their work is astounding.

However, Gerald pointed out that, until very recently, the Native Americans had only created work as part of their religion or as “decoration”.  It is only the last couple of generations that have created “art” as a means of self-expression, rather than to reinforce the identity of the group – and this has proved controversial within some Native Americans, where the communities have not taken kindly to their traditional crafts being corrupted or being expressed in a more contemporary way.

Gerald, himself a descendent of the Hopi tribes, explained that according to his lineage weaving is traditionally a man’s craft.  Such taboos are still in the process of being challenged.

So, another fascinating few days in Arizona.  I’m spending the evening relaxing at the local Tubac Inn, where a local covers band, Chuck Wagon and the Old Wheels, is playing the sort of crowd-pleasers you might expect in a former ranching town – Rawhide, American Pie and Honky Tonk Woman (twice).