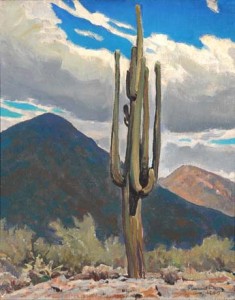 Yesterday I picked up a surprisingly large hire car and moved on to the second stop on my Arizona sabbatical, Tucson.

So far I’ve had to run the gauntlet of conversations with the taxi drivers of Sunrise Cab Co, which has been an experience ranging from fascinating to unnerving – especially in the case of one driver who was trying to convince me that the original Celts were twelve foot tall and had ties to Planet ‘X’. So it was a liberating experience to hit the open desert road in my shiny red Chevrolet Aveo – KYOT Smooth Jazz FM my station of choice on the radio.

I’m staying here in Tucson at a place called La Siesta which is referred to as a ‘Heritage Motel’ (is that an oxymoron, like ‘jumbo shrimp’ or ‘military intelligence’?). In fact, it’s a very friendly place, with small red brick apartments set in a horseshoe shape around a expansive porch. It’s on what used to be the main drag through Tucson, now a mile or so from downtown, and consequently it has some older, more characterful buildings.

Unlike Phoenix, which has seen a rapid growth that has turned much of its sprawling suburbs into a concrete jungle and swallowed up neighbouring communities, Tucson feels well planned, laid back and proud of its collective heritage. That heritage is very evident through the architecture, and the colourful painted neighbourhoods.

The downtown area teems with galleries, craft shops, delightful public artworks, and a diverse variety of small and mid-scale venues. The noticeable presence of students from University of Arizona and Pima Community College add a grungey and vibrant feel. Tucson is a very ‘walkable’ city, and I wore out a pair of shoes pacing the streets.

I find that walking is the best way to get to know a city, but when I tell the people here that I’m on foot they often look at me as if I’m totally mad, and potentially dangerous. Everyone drives here.

This morning, I visited the Tucson Museum of the Arts, which featured a very fine exhibition of work by Maynard Dixon, an artist who drew inspiration from Arizona and made his home here in the early 1900s. Dixon’s work, whether oils, pastels or watercolours, shimmers with thousands of colours, evoking the vibrancy of the desert – rather than the barren landscape that one often imagines.

The museum also run tours of ‘old Tucson’, and I was shown the remnants of the first adobe settlements of the first Europeans to reach the West, and some of their later architecture. Apparently the doorways on some of these residences were designed to be large enough to allow a horse to be ridden through the house’s main hallway. So much for leaving one’s shoes at the front door.

Behind much of this rich arts development work in Tucson and rural Pima county is the Tucson Pima Arts Council, which is possibly the organisation with most similarities to my organisation, HI-Arts. I met with Director Roberto Bedoya (what is it with ‘Robert’s and arts development?), and his colleagues David Hoyt Johnson and Leia Maahs.

The Tucson Pima Arts Council was one of many regional councils across the US to be set up with funding from the National Endowment for the Arts in the early 1980s, inspired by the model offered by UK Arts Councils. The bulk of their work involves the grant support of other non-profit arts agencies and creative individuals, but they also have a strong programme of projects linking the arts with communities and the social issues in this rural county on the Mexican border. Their strategic planning is highly impressive, and centres around the shared experience and values of their diverse community – which includes a number of Indian reservations. Being an arts administrator here requires huge sensitivity towards social and cultural issues.

Walking back from downtown, I dropped in at one of the exhibitions curated by the Tucson Pima Arts Council – a showcase of the work of rurally-based artists at the city’s impressive modern library space. Tonight I have an invitation to their public reception to herald the start of the Open Studio Weekend in Tucson and Pima county, which features some 155 artists’ studios. All of this is achieved by a team of just seven staff… it’s all very impressive.