This weekend, I’ve been attending a two-day workshop in Indonesian Gamelan in Glasgow, lead by the great John Pawson of the South Bank Gamelan Players.  It got me thinking about my connection with Gamelan music, and inspired this blog entry. 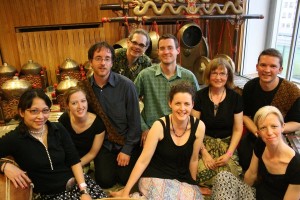 Some time in 1989, I heard Indonesian Gamelan music on a radio documentary.  London’s South Bank Centre had recently been gifted a set of Gamelan instruments from Java, and the documentary followed the first Londoners to learn how to play these incredible exotic instruments.

It was the first time I had heard Gamelan music, and I remember being held spellbound by the beautiful sounds of each instrument, and the intriguing and ornate musical structures and compositions that that those sounds came together to make.

At the time, I’d not set eyes on any Gamelan instruments, and I raced to the library the next day to look up some images.  I found that the instruments themselves were just as ornate as the music they made – intricately carved wooded bases, often painted in bright colours or golds, holding shining bronze gongs, xylophones and metallophones.

Immediately, I did two things.  Firstly, I made a promise to myself that, should I ever find myself in the vicinity of a set of Gamelan instruments, I would do all I could to get involved in playing them.  Secondly, I decided that I would ditch the A Level English Language project I was working on at the time in favour of making an audio documentary about the Gamelan (you can listen to my efforts below – thanks to my buddies Miles Watts and Richard Hall for contributing their voices to the project).

The audio documentary was easy enough to put together.  However, finding a Gamelan orchestra to play with was more difficult. The vast costs of commissioning the production of a Gamelan set and then importing it to the UK mean that opportunities to play these instruments are few and far between in Britain.  A number of Universities have access to sets, but often keep them locked away from the general public.

It wasn’t until I moved to London nearly a decade later that I finally managed to begin studying with the South Bank Gamelan Players. 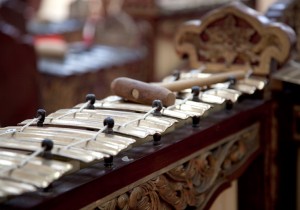 The Gendèr is played with a wooden mallet

The great thing about the Gamelan is that, whilst the instruments are very precious, they are also made robustly of iron or bronze, and therefore can take a hammering (quite literally).  They are also tuned to a five note (sléndro) or seven note (pélog) scale, which means that it’s also pretty hard to find notes that clash too badly with each other.  Great news for the novice!

The sounds of the Gamelan are also evocative of many other sounds – the gongs are thunder, the sarons (metallophones) can sound like rain or running water, the drums and cymbals can represent the sounds of battle (and are often accompanied in performance by shadow puppet warriors in battle)…

In addition, rather than the  music being notated in Western style with dots strung out across telegraph wires, the Gamelan is simply written using the number corresponding to each note (1 to 5 for sléndro, or 1 to 7 for pélog), with little dots that indicate when to rest.

As a result of this simplicity of notation and robustness, the Gamelan is a fantastic tool for teaching music to children, those with learning difficulties, or non-musicians.

On the other hand, the layering of complex musical patterns on the different instruments of the Gamelan mean that sophisticated musical pieces can emerge very quickly. 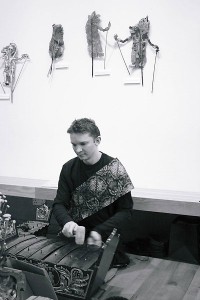 One of the joys of playing in a Gamelan orchestra is that all the players are encouraged to learn each piece of music on all the different instruments of the Gamelan, and players can regularly move from instrument to instrument between or even during pieces.  This gives you an appreciation of each piece of music from the perspective of every player, the idea being for each player to understand the piece intensely and to work better as a group.

For me, nothing demonstrates the differences between Eastern and Western culture better than the music of the Gamelan as compared to Western music.  I’ve never done much in the way of musical theory, but it seems to me that, in Western music, one usually finds that the music resolves at the very beginning of each bar and the players will then continue playing around that note or key for the rest of the bar.  As a result, Western music seems to mirror the “quick fix” culture of the West, where we want everything here and now and have little patience.

In contrast, the Gamelan will only resolve to a note or key at the very end of a bar, with many of the instruments starting to preempt that move early by playing embellishments that lead you towards that fleeting moment of resolution.  This gives the music a real sense of momentum, flowing forwards without ever quite arriving.  As a result, it can be much more meditative.  Indeed, as a player it is often best not to think too much whilst playing – by over-analysing or thinking too hard, I for one always find that I quickly lose where I am in the piece.  When this happens, the only way of getting back in to the piece is to listen out for the big gong, as this always marks the end of a particular section of the music.  If the gong player messes up then everyone is screwed, so whilst the gong may look an easy part to play it carries grave responsibility!

I never really graduated from beginners class during my short time in with the South Bank Gamelan Players in London, and soon I was working in the Highlands and Islands of Scotland with had no access at all to the instruments. 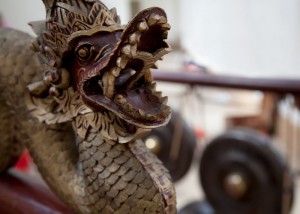 More recently, however, moving to Central Belt Scotland I have had the great priviledge of playing with the wonderful Glasgow players, Gamelan Naga Mas (literally “Golden Dragon”).  An iron gamelan set was gifted to Glasgow for their 1991 City of Culture celebrations, and the wonderful players of Naga Mas have looked after the instruments ever since, ensuring that they have a good home.  They have organised opportunities for the community to learn and play the instruments, and regularlystage concerts of both traditional Indonesian Gamelan music and newer pieces, often joining forces with dancers and musicians from other disciplines to put together new and exciting fusions.

In my short time with the group, Naga Mas has developed music and played concerts with storytellers, dancers and pipers.  We’ve played the Royal Festival Hall in London (a proud moment witnessed by my Mum), Eden Court in Inverness, the Botanic Gardens and the Royal Concert Hall in Glasgow.  With some experienced music therapists and educationalists in the group, the Nagas also play a strong role within community learning in Glasgow.

Naga Mas remains the most democratic band I’ve ever played with, and has the dynamic of a family in the best sense of the word.  Whilst many of its members are professional musicians, high level contributions and even compositions are welcomed from even its newest and least experienced members.  I’m very glad to be back playing with them after a couple of years’ break.